French saxophonist born in 1991, Léon Phal is born in a family of artists. From his early
childhood he became interested in music and spend most of his time in his father’s
recording studio. He began to learn the piano at 5 and then devoted to the saxophone
since he’s 8 years old. In 2009, after obtaining his classical music prize at the Conservatoire de Reims (France), he went on tour with “La bande Original”. He accompanied artists such as Oxmo Puccino, Olivia Ruiz, Amadou and Mariam, Vincent Ségal, Cyril Atef. After this enriching experience he decided to learn the composition and jazz arrangement with of Manu Pékar and began taking improvisation lessons with Rick Margitza and Dave Liebman. At the age of 20, he joined the Jazz Academy at La Haute Ecole de Jazz in Lausanne where he developed his musical universe with jazzmen like Robert Bonisolo, Matthieu Michel, Mark Turner, Emil Spanyi, Vinz Vonlanhten and Bänz Oester. In June 2015 he obtained his master and began a second master in pedagogy.
He has performed on stage with Gilad Hekselman, Hervé Sellin, Andy Emler, Chico
Freeman and Pierre Drevet.
Léon is an artist with many influences, he collaborates with formations of eclectic styles
and regularly performs in the biggest festivals in France and in Switzerland (St Gallen
Open Air, Gurten festival, Belfort Eurokéennes, Heitere Open Air, Montreux Jazz festival, Cully Jazz festival, Reims Sunnyside Festival, Cabaret Vert..). We can find him in formations such as Cauliflower, C.OT.I (Hip-Hop), Bastian Baker (pop), Danitsa (neo-soul), Sons of Africa (Reggae) and others. 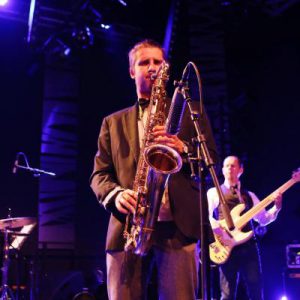